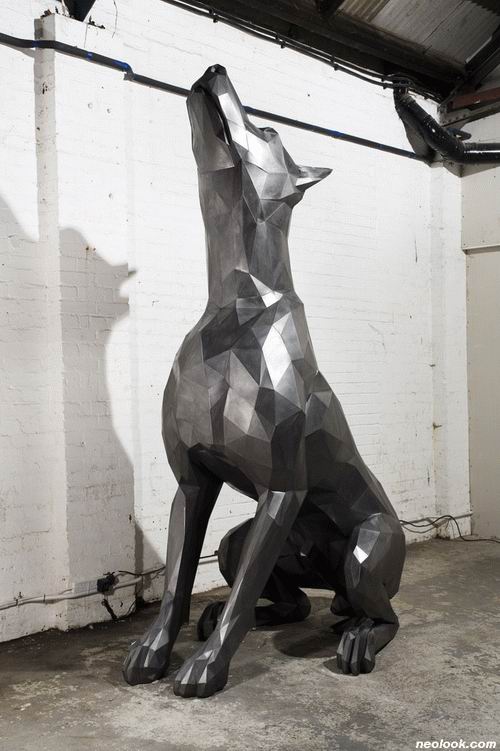 Using sculpture, performance and photography, South Korean artist Chongbin Park, explores the effect that our surrounding culture and environment has on us as individuals. ● Since arriving in London in 2003, Chongbin has, at times, felt culturally detached or alienated from his surroundings. His monumental large-scale sculptures of figures, using fragile and light materials such as paper, represent this distance he feels between his artwork and his audience, and his own personal fragility from living in a foreign city. 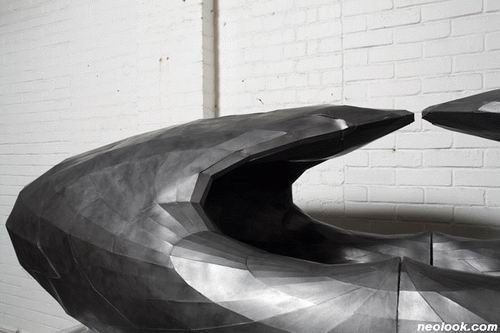 The central piece in this exhibition is a gigantic figure of a Doberman dog looking obediently upwards, towards its master. Entitled Looking at Him it explores the paradoxical relationship which exists between suppression and protection or the tamer and the tamed. ● Looking at Him is made entirely from cardboard and has been constructed using 3D polygons which have only one surface. This surface has been laboriously rubbed and polished or tamed, to the point that its appearance has been altered and it looks almost metallic. The final piece therefore, appears as though it has been made from a much heavier and more aggressive material. Thus distorting the viewers perception, and hiding the fragility of the structure underneath. ● Other work in this solo exhibition includes; Child in our time a cardboard figure of a ten foot tall baby encased in an arrow shaped box, which Chongbin journeyed with across London. This journey has been photo documented in a accompanying book. Feeding a series of photographs of small chicks, and an animated video piece of a figure of a child trapped in a circle constantly searching for a way out. 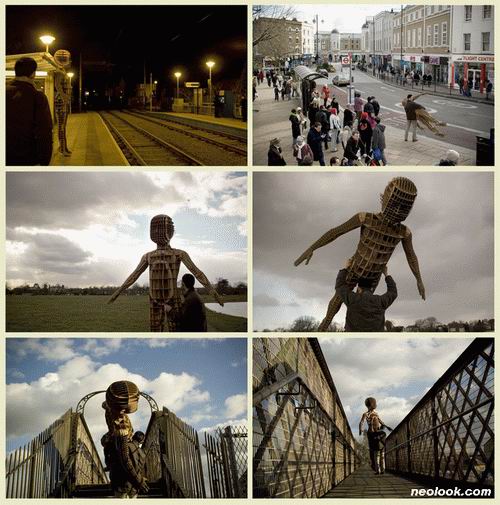 Artist Chongbin Park said: When I started work on "Feeding", my intention was to recollect my childhood memories of breeding birds. However, as I began to tame the birds, there was a moment when I started to realise that this lovely little creature in the palm of my hand could be crushed by one clenching of my fist. Mixed with feelings of fear and superiority, my desire, not only to protect and feed the chicks, but also to control them became the focus of this photo documentation. I feel this inner conflict, has up to this point been central throughout my work." ■ Corn Exchange Gallery