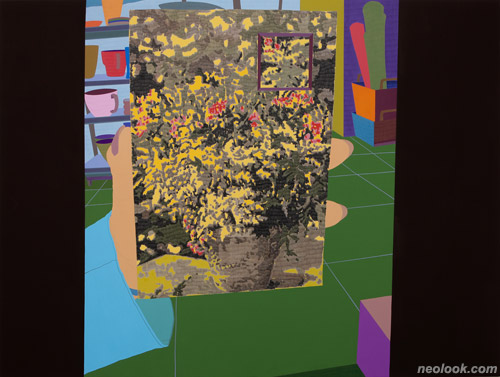 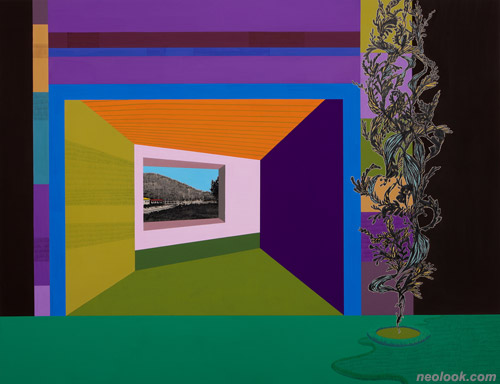 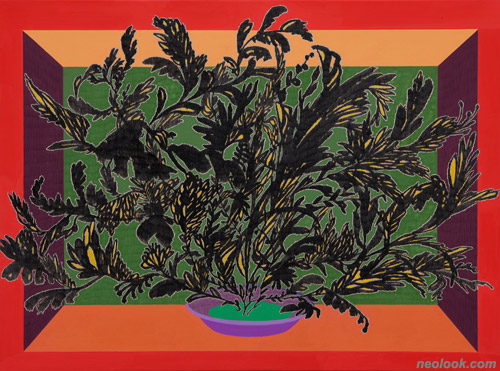 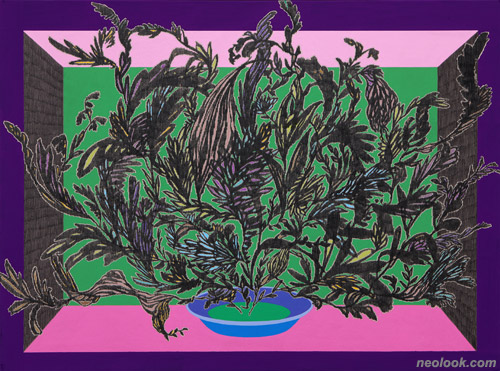 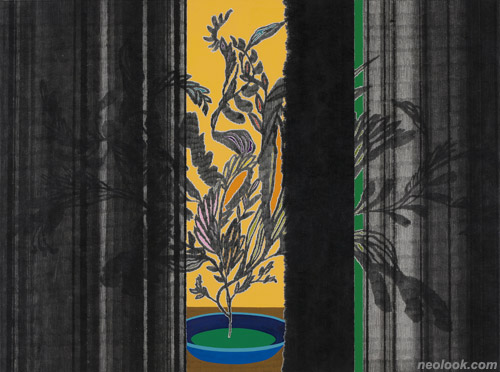 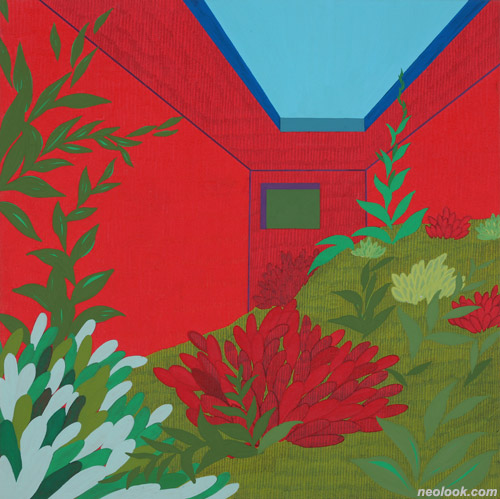 Real vs. virtual, question to myself in between ● Plants are substantial axis to the work of Park Sang-mi. Artist's interest in plants was initiated from the image of budding, sprouting leaf and blooming. She found that the image of the plant repeating the growth and extinction reflects humans going through repeated growths and changes. Ever since started to create scenes made of plant images, the work of Park Sang-mi illustrates scenes by people come into bloom just as poem by Chung Hyun-jong, 『Man Blooms into the Scene』 with the lyrics saying 'There's a time for the man blooming into a scene'. ● As well as the imagery of plants, another important axis for the work of artist is space. She intends to make variations of the plant imagery in virtual space thoroughly created by the artist's imagination as well as real spaces based upon her daily experiences. Plants ask 'where I am' in the real space represented in 'Seat' series and start the journey in order to climb up higher. However, there is no clear answer to the question and the road outside only looks foreign to the plants. ●The plants constantly have relationships with other plants and try to correspond to the space but then they get cut off and isolated constantly. ● To the plants, real space is not the site to be settled in but where confusion and scarcity lie. On the other hand, the virtual space compared to the real is realized by 'Scene_space' series. The space arranged in colorful façade and perspective is attractive enough for plants. But still they hesitate to go in and take the posture of watching since the space does not seem to allow entrance easily. It is also possible to assume the withered psychological condition by the reduced size of the plants at the virtual space compared to the 'Seat' series. Although they manage to enter the virtual space, the shrunk plants are shown to themselves with their smaller bodies among the relationship with others. It surely is a hard and involved work but there is no way to give up or concede. In the work of Park Sang-mi, the virtual is where plants recover from damages providing solace and alternatives to overcome the limit of the real. ● In either the real or the virtual space, plants cannot get out of discord and tension. In the work of Park Sang-mi, there exists the 3rd space between the real and virtual. 'Pottery series' presents an in-between space where to try a reverse to set an order to confusion, and to change inexistence to abundance. This time each plant is given an individual vase. The vase is a space to spare minimum nutrition necessary for plants to grow without any trouble. In there, plants live peacefully. However, the work of Park Sang-mi, calmness is an extension of boredom. In the vase, there is no complete scarcity or repletion. Then, two desires wriggle together either to seat itself dearly with the leaf of achromatic plants or to discover something new. Determination inclined to end up with self satisfaction and anxiety dangle along with each other. It is that contradictory conceptions are growing on a one rooted plant. The artist's names the situation of the plant in a vase 「Multi Ego」. Her recent works which densely exhibit the 「Multi Ego」 packed in the in-between space seemingly have moved to an extended level from defining the relation between plants and spaces. As plants take over more space, they started to be concerned about their egos more actively and intensely. Now, the plant with the multi ego does not judge itself by the perspective, views of other plants or roles and conditions forced in a particular space in order to prove itself. Its view which was focused towards outside are drawn back to the inner-self as well as directing its consciousness towards itself. The only rule to define oneself is the self made up with ironic nature. ●Real and the virtual to discover the self in between is joyful pilgrimage of Park Sang-mi. It wouldn't be easy to get to the conclusion and the time will pass rather slowly. Nonetheless, she will not hurry. What matters for the artist is not to reach the place to settle down shortly but the process in itself to look for the self slowly across the sphere speculating with different ideas. Not wondering but questioning her own path, the artist's recent works are fulfilling her own confusion and scarcity with order and fullness taking the precious step towards her final artistic destination. ■ Gong Ju Hyung