DOMESTIC PARTNERS: USA and INDIA ● I began the DOMESTIC PARTNERS Series in 2008. It was when my cat knocked the antique green plate off the table and it broke into pieces on the floor. I could not throw it away. It had existed for over 70 years and now it was destroyed. Instead, I made a painting…looking down on it in pieces on the floor. Then, as things began to attract my attention in and around the house, I worked on this series of still-life paintings on 12” circles and called it DOMESTIC PARTNERS – things I love in my environment. In 2012, I sent 5 of these paintings to a friend in Kolkata, India, to be in an exhibition there. This year, 2015, I was invited to attend an International Artists Residency in Santineketan. Knowing I would be in India for a few months, I prepared and brought with me 10 more panels, realizing that the objects in the Indian home are often very different and unique to India. All of these panels are included in this exhibition – along with a few other works – some of which were made in India and some in the US. All are painted directly from observation – from life. ■ Jackie Lima 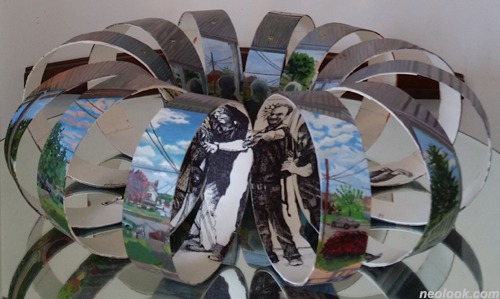