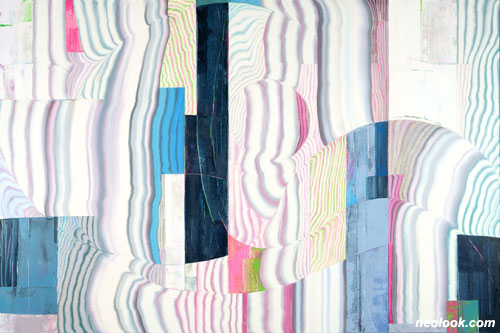 KIM YOUNG-HUN: PUSHING THE BOUNDARIES OF ABSTRACT FORM ● Age of Enlightenment star and the first great art critic Denis Diderot was so stunned by the grandeur of Gottfried Wilhelm Leibniz's achievement, he exclaimed, "When one compares the talents one has with those of a Leibniz, one is tempted to throw away one's books and go die quietly in the dark of some forgotten corner." Korean painter Kim Young-Hun was similarly overwhelmed when, as an art student in London, he saw Francis Bacon's paintings at a Tate Britain show in 2008. So awed was he that he couldn't paint for days. Diderot didn't actually agree much with Leibniz's philosophy; he didn't "go die in some corner," and today we consider him a great 18th century philosopher whose thinking had significant historical impact. Kim too rose from his stupor. The Bacon challenge drove him to develop his own artistic language, making him the artist he is today. 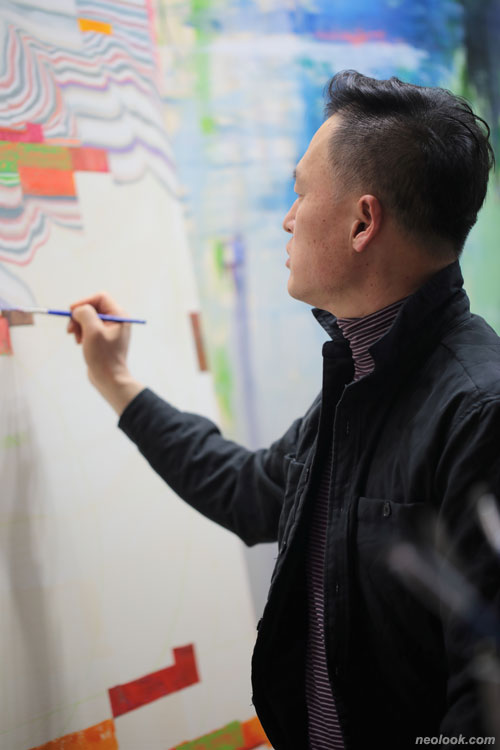 Photo of KIM YOUNG-HUN working in the studio.

For motifs, Kim found himself drawing upon youthful memories. Prone to reverie, his imagination soared when he read comic books as a child. Going fishing at the age of 13, he became absorbed for hours in the ebb and flow of water waves, giving him his first introduction to abstract imagery. Still reverberating in his imagination is the white noise he heard and saw on old analogue televisions—the dotted or snow-like random flicker that, in part, is caused by the cosmic microwave background created in deep time, when the universe was only 380,000 years old. This experience of those microwaves, a mainstay of modern cosmology, amalgamated with impressions Kim acquired later in life. When he was studying in London with his very young son remaining behind in distant Seoul, the two communed through online games and virtual reality simulations. All these things sensitized Kim to the relationship between reality and fantasy, as well as the analogue-digital relationship. It is as if deeply embedded or sedimented memories resurfaced in his painterly life, his imagination stirred—as William Shakespeare's was, says TS Eliot—by a rebirth akin to Venus Anadyomene rising from the sea. Think of the wistful nostalgia that pervades Sandro Botticelli's Nascita de Venere (The Birth of Venus) (c. 1485). For the last decade Kim has been painting a series of works he calls Electronic Nostalgia. ● Take p2006-Electronic Nostalgia, which Kim painted in early 2020. It tells us that, notwithstanding the digital world's allure, it is the tactile analogue world, the world in which painting takes place, that truly permeates his artistic vision. His electronic nostalgia becomes in effect a longing for the world we see and touch and feel with our senses. Yet, paradoxically, his painterly intelligence keeps luring him into another virtual world—that of the imagination. Consider his use of periwinkle in the painting's lower half on the right-hand side as well as the top left of the painting. Periwinkle is a shade of violet, which David Scott Kastan calls "the shimmering, fugitive color of the sky at sunset." You think of the Impressionist and Symbolist painters exploring in profound, transformative ways the possibilities of violet—a deep cultural well which Eliot tapped into when he spoke of "the violet hour" in The Waste Land (1922). Deploying periwinkle, Kim similarly encodes in his art a great arc of human creativity. 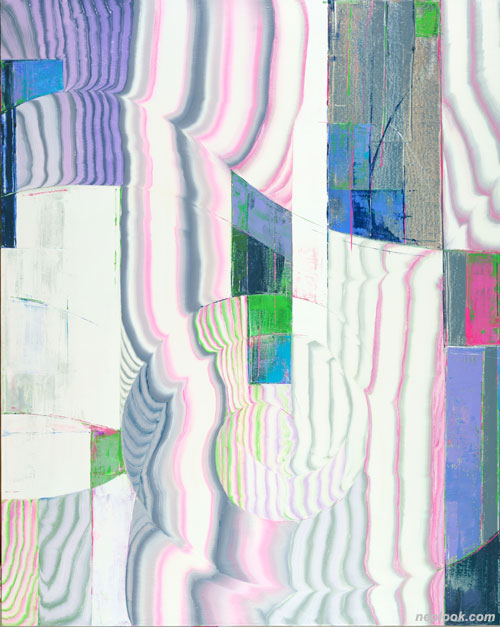 Such intertextuality is not just a desirable strategy; it is a necessary thing, suggests Wendy Steiner. A literary scholar who has written extensively on the literature-visual art interrelationship, she tells us, "It is only by viewing paintings in light of other paintings or works of literature, music, and so forth" that their complete semiotic power can be realized. Look again at p2006, paying attention to the rectilinear bands that counterpoint the wave-like topographical images that dominate the painting. Created by Kim using a layered, palimpsest-making approach, they make you think of the late abstractions of Gerhard Richter, which Kim admires and which received pride of place at the recent Metropolitan Museum's retrospective of the great German artist. Reviewing the show, Peter Schjeldahl called the paintings "miraculously, often staggeringly, beautiful." Kim's technique is different from Richter's and his purposes are his own; yet, his painting, too, is beautiful and resonant with semiotic significance. Gazing at it as a totality, you might well think of Susanne Langer's insight when she said that in a successful work of art "symbolic form, symbolic function, and symbolized import are all telescoped into one experience, a perception of beauty and an intuition of significance." ● For more far-reaching intertextuality, look at Kim's p1929-Diamond Mountain (2019). All of the above applies to it. But it also embraces another arc of human creativity—an extraordinary burst of artistic innovation in Korea inaugurated by painter Jeong Seon (1676–1759) through True-View Landscape Painting, a style that replaced earlier traditions that depicted Chinese scenic spaces or imaginary generic landscapes. Incarnating an expanding awareness of a Korean national and cultural identity, the new style focused on actual ("true") Korean scenic views. It gave prominence to regions of extraordinary beauty or grandeur, the most sublime of these being the Diamond Mountains (Mount Geumgang). Their very splendor made them magnetic poles for cultural and historical memory. Mount Geumgang, now isolated in North Korea, has also become, for South Koreans, an object of nostalgia and yearning. True-View Painting became, too, the arena through which Western artistic ideas and techniques began to influence Korean art. Transmuted through Kim's personal sensibility, mutations of all these things coalesce into a global eco-system when you reflect upon p1929-Diamond Mountain. 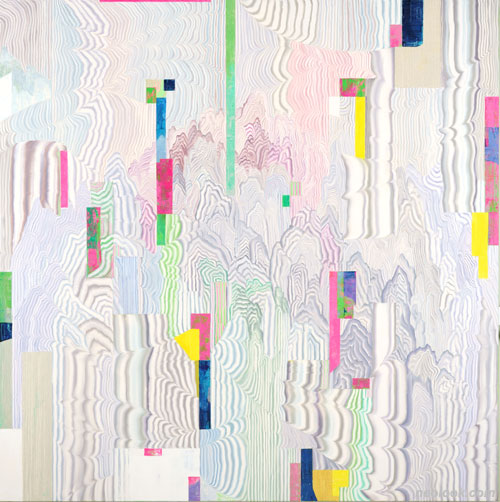 Kim says his art is driven by a powerful inner need to observe and decipher "the unknown between the 1 & 0 of binary codes." The conundrum here is this: quantum mechanics explains a truly enormous part of the physical reality in which we live and is responsible for much contemporary technology, including the digital realm, but though quantum physics was launched well over a century ago, nobody understands why it works. Could artists succeed where scientists have failed? Perhaps not. But, operating through beauty—another enigmatic thing—art objects might de-center the viewer and open their sensibility anew to a world of which they are a part. Art has in the past helped catalyze new scientific thinking. The same thing might happen again. Keeping that thought in your mind and body, look now at a third painting of Kim's—p2005, Electronic Nostalgia (2020)—and contemplate its beauty. ● Asked recently to name an artist, living or dead, he admired most, Kim said, "Francis Bacon." While this essay began with an account of the near-traumatic impact that Bacon's art had on Kim when he was an art student in London, his paintings do not seem to reflect any ideas or impressions he may have taken from Bacon. But, maybe, in some subtle, subterranean way, Bacon's art did influence Kim's work. Bacon's painting embodied great visual inventiveness and beauty in the use of paint, as Michael Peppiatt, his friend and biographer, has pointed out. On this, does Bacon have in Kim a worthy successor? This may be too big a question to answer right away. But surely it would be right to point out that Kim has successfully married a Korean brush technique (hyukpil) with Western brushwork. Thereby, he has, through sustained engagement with abstract form, extended its boundaries. 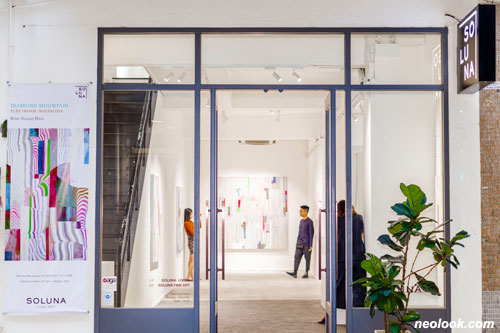 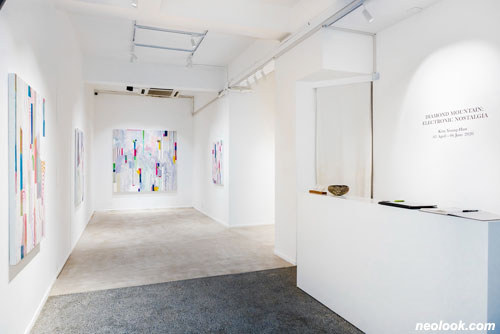 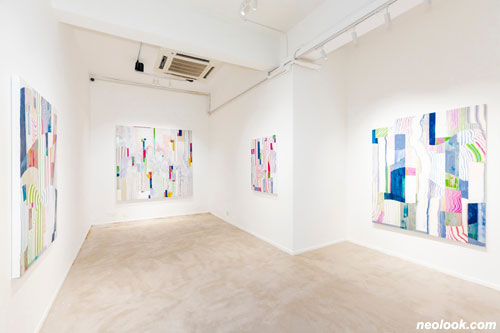 Peppiatt also tells us that though Bacon disliked imagery that "told a story," in the 20th century's second half "no one . . . created as vivid and compelling a relationship between painting and poetic drama." In the same interview in which Kim referenced his great admiration of Bacon, he spoke of his interest, going forward, to exploring in his art "epic themes and narratives." In his Diamond Mountains, he has, through allusion and suggestion (intertextuality), made a start in that direction. ■ SIBA KUMAR DAS